Author’s note: this blog was written in April 2019.

Excuse the explicit language in the headline, but it’s time for me to talk about something important. Poop. You might not think this would be a life or death conversation, but for some people, it might be. Please endure this ridiculously long blog post with me while I try to save some of your lives with the socially taboo topic of feces.

Why am I assaulting your senses with the subject of poo? Well, there’s a very important reason. I have lost three people in the past 16 months to colon cancer. A lot of the symptoms of colon cancer are related to your poop. What it looks like, how it comes out, and how it feels. People don’t want to talk about this because it’s embarrassing and gross, but it’s not worth dying over, so let’s talk some sh*t.

First, a little about the people who inspired this post: 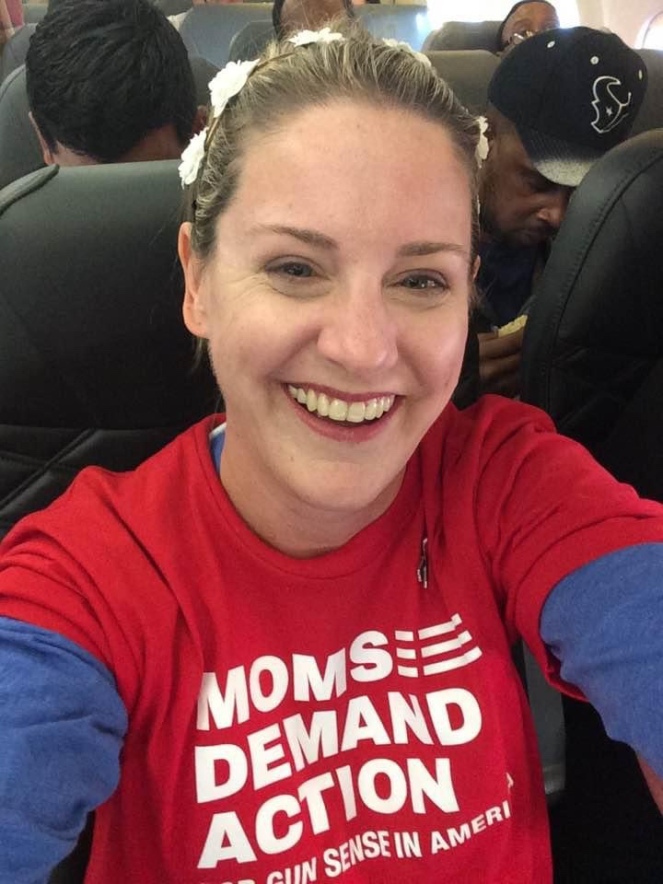 The first person I lost to colon cancer was Catherine Nance. Cathy and I met while advocating for sensible gun laws at the Texas state capitol building. We spent about five hours walking around to different legislators’ offices at the start of the 2015 legislative session. She was diagnosed with colon cancer about a month later, but continued to visit the capitol when she was able, just as feisty as ever. Cathy passed away in November, 2017, just months after her 40th birthday. I was on my way to her funeral with four other gun sense advocates when we learned about the Sutherland Springs church shooting, reminding all of us that we still had work to do to fulfill our promises to Cathy.

The second person I lost to colon cancer was Karen Slay. Karen was the second Texas PTA President I served under when I worked for the Texas Parent Teacher Association. She was the embodiment of the phrase, “Though she be but little, she is fierce.” Karen became an advocate for Texas children in the early 90’s when a car accident took the lives of several kids who had been riding in the bed of a pickup truck in Lubbock, where she lived. In response, Karen started working with Texas state Senator Robert Duncan to create the “Kids Aren’t Cargo” campaign, which eventually succeeded in making it illegal to transport minors in the beds of pickup trucks in the state of Texas. Karen passed away on Valentine’s Day this year (2019). She had four grown sons, and she still had a lot of life left to live.

The third loss was the hardest for me because it was so personal. Michelle McManners was my best friend. We became close during our senior year in high school, and stayed close for the rest of her life. We shared an apartment in college. We traveled together. We were in each others’ weddings, and she was the godmother to my firstborn child. Our husbands are friends. Our children are friends. Her family is like my own family, and vice-versa. My past is steeped in memories of Michelle. Michelle was a teacher, and was so passionate about teaching and reaching children. She had a masters degree in psychology and had done her practicum at CARD school in Austin where she worked with autistic children. Her experience with special needs kids gave her a patience and compassion that was unrivaled. She was artistic and creative, whip-smart, and loyally devoted to her family and to God.

So back to poop. There were no topics Michelle and I couldn’t discuss. We spent the night at each other’s place innumerable times over the course of our 18 year friendship. We talked sh*t before. Both figurative and literal. In 2015 I had been reading about colon cancer because of Catherine. Cathy was an advocate in all walks of life, so once she was diagnosed with colon cancer she became a fountain of knowledge on the topic, and shared that knowledge with anyone who would stand still long enough to listen. So in a conversation I had with Michelle, she said something bathroom related that caused a red flag to go up in my brain, and I encouraged her to go get that checked.

Michelle and I had a lot of things planned that we never got to do, because in February 2016 at the age of 32, she was diagnosed with stage IV colon cancer. Michelle fought so hard. After the initial colon surgery she underwent a liver resection that removed about 3/4 of her liver, but the tumors returned. She had an experimental Y-90 procedure done to insert glass beads that had been treated with radiation directly into the new liver tumors. The radiation from the beads caused incredibly painful gastritis that left her screaming in pain and caused the inside of her stomach to look “like hamburger meat,” according to one of her doctors. She had a spinal surgery to remove a tumor in her spine. The tumor returned, they operated again. They couldn’t remove it all without paralyzing her, because it was wrapped around her spinal cord. The cancer spread to her pelvis. She underwent intensive radiation therapy getting daily “zaps” for three weeks. She exhausted her lifetime limit of two different types of radiation. Her hair fell out. Her skin dried and cracked and split. Her digestive system simply didn’t function properly anymore leaving her in the bathroom for hours.

What about the natural cures?

Michelle led a healthy lifestyle prior to diagnosis. She ate organic everything, veggies, dairy, meat, etc. She ate tons of clean, raw vegetables and fruit, plenty of yogurt, and she never had a taste for sugary stuff (except while pregnant). I remember watching in disgust as she peeled off and ate raw the stem of a head of broccoli. Once, at a party where everyone was chowing down on chips and junk food, she found an avocado and ate it plain on a plate with a fork. She was a runner, she ran 10Ks and half marathons. She did yoga. She was young, active, and healthy, except for being riddled with cancer. After diagnosis, she tried all the natural cures alongside the traditional pharmaceutical ones. She drank gallons of alkaline water, she tried cannabis in all its forms, we laid hands on her and prayed for a miraculous healing.

She didn’t have a family history, and, probably the most tragic, she had been asking doctors about her poop troubles for about a year before someone finally ordered a colonoscopy. She had been wrongly diagnosed with IBS and hemorrhoids by at least two doctors. By the time she was granted a screening, she was in near constant pain, waking up in the night from it to take ibuprofen. That was probably the spinal tumor.

If you have a tumor in your colon, the evidence will be in the toilet. I know it’s not ladylike, but you have to look. Don’t flush the evidence, check it out. There’s no one size fits all poop color and shape to indicate healthy (or unhealthy) feces, but here are some things that *might* indicate a problem, and definitely need to be examined by a doctor. Here is another, more extensive list of potentially problematic poop.

Michelle told me that when she read the symptoms for colon cancer after her diagnosis, she had pretty much all of them, but that she also had normal stools at times in between her weird ones.

If you’re having poo issues or butt issues, the doctor is probably going to check your poo and/or your butt. Sorry. Here are some ways doctors screen for colon cancer. Sometimes it gets awkward. I have had really cringe-inducing conversations about the consistency of my poop, and whether or not that’s a normal consistency for me, and how long it’s been going on. I have had a colonoscopy. I have had to collect my own stool samples (I said a prayer for anyone whose job it is to work with adult human feces that day. Barf.) I have had a rectal exam. It is not high on my list of things to do for a good time.

If you have to have a rectal exam, here’s some things you can do to make this experience slightly less sh*tty.

Listen, this is weird, it’s gross, and I hate the hell out of it, but after watching my best friend die from colon cancer, I can guarandamntee you that I’d do this over and over again before choosing that.

Why you should do this:

Colon cancer deaths in the US are declining for people over 50 but increasing for people under 50. That is a direct result of insurance companies covering colon cancer screenings for people over the age of 50. It’s actually not super easy to get a colon cancer screening if you’re under the age of 50. (This was recently updated to 45, but two of my three friends who died of colon cancer never made it to 45.) Check out some stats here from fightcolorectalcancer.org: (The text below is a screen shot, so if you want to see the statistics, you will have to click the link above)

What you can do about this:

First, listen to your body. If you have any symptoms, go to the doctor. If you *know* something isn’t right with your body, kick up a fuss until someone listens to you.

Second, sign this petition to encourage our legislators to remove the barriers to colon cancer screening. This is a bipartisan issue that everyone should support. The statistics are clear. Screenings save lives, and colon cancer affects young people too.